NCL Innovation Leads Second Round of investment in Coomtech Ltd 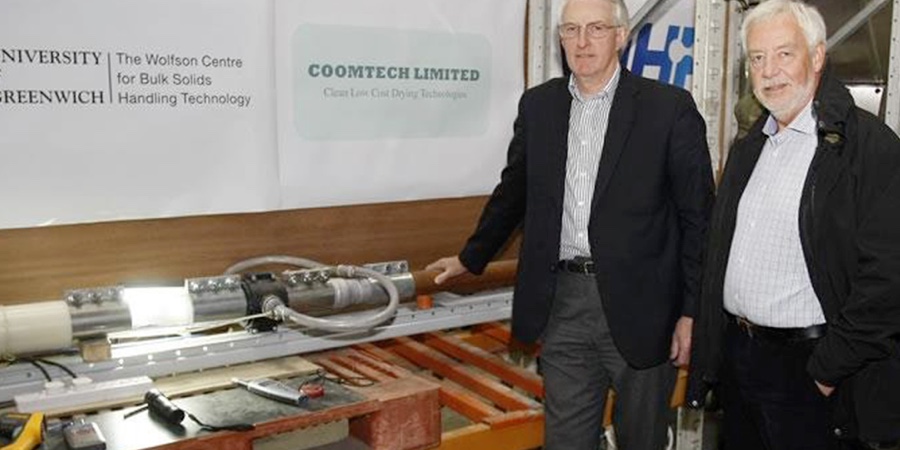 NCL Innovation, the UK’s leading early stage technology investor, has joined a second financing round for Kent based start-up Coomtech Ltd. The investment was made via the NCL’s Discovery Park Technology Investment Fund (DPTIF).

Coomtech Ltd has worked closely with the Wolfson Centre for Bulk Solids Handling Technology at the University of Greenwich in Chatham Maritime, finessing an ingenious turbulent airsystem that dries low grade coals, waste material and minerals. Drying costs, depending on materials, of 25-35% of traditional thermal drying have been demonstrated, producing financially viable sources of fuel for power producers, while also dramatically lowering emissions.

The company has spent recent months carrying out advanced tests for commercial partners in the run up to its first commercial deployment later this year. The potential for the device is already creating global interest, with the first link up, a partnership with a major power generator, expected to be announced shortly. The link up will give this first energy plant the capacity to dry 500K tpa of coal.

The potential of this innovative drying process is not restricted to coal, with uses across a range of energy sectors including fly-ash, minerals and steel industry waste streams. A new partnership for fly ash has also been entered into, recycling wet fly-ash from power plant waste streams for use in the construction industry products.

On the back of its support from NCL and KCC through the Discovery Park Technology Investment Fund, Coomtech Ltd have secured a £290,000 grant in partnership with CTec, and other commercial partners to fund further development. It is currently in the process of hiring engineers and apprentices in Kent to help with the role out of operations.

The company, currently based at Discovery Park, Sandwich, Kent also has plans to develop its operational headquarters at the neighbouring Betteshanger Sustainable Parks, near Deal on the site of the former Betteshanger Colliery.

Peter Anderson, CEO of Coomtech Ltd, said: “We are eternally grateful for the support given to Coomtech from both NCL and Kent County Council. The funding has enabled us to attract further private capital, secure grant funding, recruit experienced local resources and quickly accelerate our commercialisation programme.

“Without the belief in our technology shown by our cornerstone investors, Coomtech may not have made it out of the starting blocks. Now we are on our way to becoming a major success story for both the power station industry and for Kent.

Jerry Biggs, CEO of NCL Innovation, said: “We are delighted to have played our part in the success to date of Coomtech, which has benefited from the support we’ve been able to provide through the Discovery Park Technology Investment Fund.

“With a number of commercial partnerships in the pipeline involving many of the key players in the energy production market, it’s clear that our faith in the potential of Coomtech has been well placed. They are on the road to great things in 2017 and beyond.”

Ampersand Health – NHSX today at #REWIRED22 announced the latest winners from the second cohort of the Digital Health Partnership Award.

Read more
View all from News

Want to discuss an investment opportunity with us?